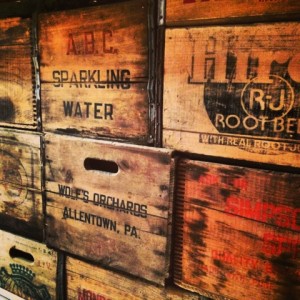 So here’s the basics: Doylestown is getting a new restaurant when the owners of the Doylestown Inn convert a big chunk of their lobby into The Hattery Stove & Still, which is set to open in April.

Yes, it’s a weird name (chosen because, apparently, the building once housed a hattery, as well as a cigar bar and, well, an Inn). No, there’s no chef on the books yet. The concept is going to be New American, with a 7-day brunch schedule, lunch and dinner service, afternoon tea and a late-night menu. The decor will be “antique industrial” which basically means a whole lot of old stuff (like vintage suitcases and old cigar boxes) hung on the walls, a bar made to look like a riveted airplane wing, a second bar utilizing a 1932 Oldsmobile complete with suicide doors, and 16 taps, all dispensing American craft beers.

But none of this is why I like the idea of this place.

The reason why I like The Hattery as a concept? Because in addition to being a hattery and a cigar store back in the day, the place was allegedly an honest-to-god speakeasy during prohibition. And frankly, with the number of “prohibition-era” faux-speakeasy bars opening these days in former hair salons and cupcake shops, turning a former speakeasy back into a speakeasy.

Or at least a speakeasy-style bar made out of an old car.